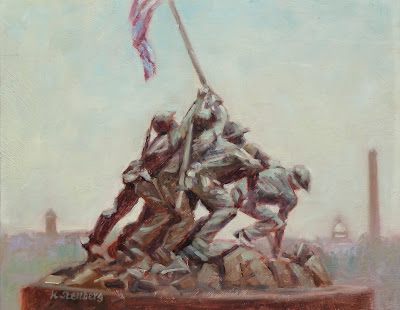 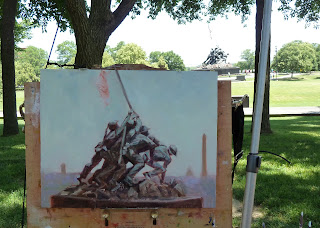 A friend of mine wanted to paint Iwo Jima Memorial.  She went there twice just to draw and several more times to paint it in the course of two weeks.  Impressive!  Tuesday last week I was supposed to meet her there, but somehow missed the exit off Arlington Boulevard and ended up in Washington, DC.  Oops.  Yesterday I followed another friend's car not to get lost again.  I don't know what the story says about me: my stubbornness or poor driving skills.

Anyhow I made it this time and was impressed by the memorial.  I have seen it many times driving by, but never actually visited it to pay my respect to the people who died during the terrible battle fought on Iwo Jima in 1945 during World War Two--20,000 Japanese and many American soldiers as well.  The weather could not have been better after the last several steamy summer days of Washington.  Four of us settled in a shade to paint the view undistrupted.

The biggest challenge of painting "Iwo Jima Memorial", of course, was drawing, since it involved the sculpture of five men.  You don't have much margin of error in drawing human anatomy.  The sculture doesn't move, but the shadows do.  When I started the drawing, the memorial was backlit; by the time I started painting it was sidelit.  This worked in my favor, but the shadow/light shapes had to be adjusted accordingly.

I used to have a tendency of getting into a slight panic mode whenever I painted outside.  The pressure of limited time, the sun's movement, clouds moving in and out, and so on made me hurry and do a sloppy drawing to get going with painting.  Now I usually sit down to paint, which is less tiring to my lower back and somehow inducive to a more calm attitude.  If I nail the drawing at the outset, the painting takes less time and becomes less belabored.  Each brushstroke is deliberate and there isn't much blending going on (or, at least, that is the goal).  Richard Schmid is my saint patron; I read his book, Alla Prima, in rapture.  These days I try to channel his spirit whenever I paint.  I cheated, however, with one thing.  The flag was painted at home from a photo.  Am I bad?

The painting was juried into The Art League show in Alexandria, VA in June, 2011.