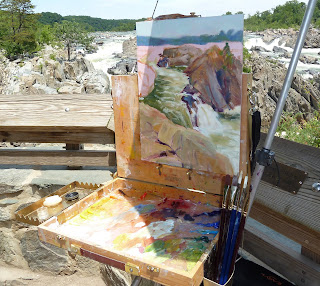 Last week when I heard the weather forecast for the first three days of the coming week, I knew what I would be doing.  Plein air painting!  I organized a paintout at Great Falls Park in northern Virginia.  Five of us met in the late morning on Monday, congratulating each other on our good fortune of painting outside on such a glorious day, which is rare here during the summer.

I painted Great Falls three times last summer with unsatisfactory results.  I learned that rocks could move!  Not literally, of course.  But after a couple of hours of staring the same rocks under the intense sun with hearing deafened by the roaring water, rocks did seem to move.  I ended up overpainting.  This year, I came up with a new battle plan.  I decided to cheat.  How?   By framing a good design on the LCD screen of my trusty Leica, and drawing the big, major shapes on the linen, I saved a lot of time at the outset.

Then I painted the sky, the distant woods, the foreground rocks, and so on.  I painted in, section by section, finishing brushstrokes, meaning I didn't go back later to refine if I could help it.  For the rocks, I focused on the planes, values (lights/darks), and subtle color changes.  As you can see in the above photo, the rocks don't have a lot of detail at this point, but the major shapes, values, etc. were well established.

The water, or rather, the pattern created by the water falls was the structure under the design, so it was important to get their shapes right.  Wow, you would not have believed how dark and blue green it was in some places.  By the time I went as far as the stage captured in the photo, I was getting tired and hungry.  The sun had moved and, despite the umbrella, the canvas and palette were in the sun, which is no, no.  I quickly finished the rocks on the left in the middle ground and called it quits.  The painting was finished at home today.