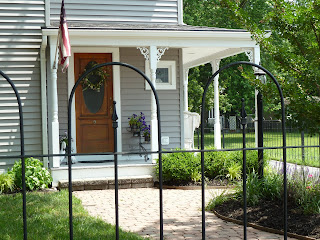 Bobbi Pratte's workshop was coming to an end.  On Sunday afternoon, we went to Solomons Island Road--downtown, so to speak--to paint.  I have spotted this charming Victorian house on the previous day and was determined to paint it.  The clouds were gathering, however.  It got so breezy for my friends who were painting a tackle shop across the bay that they had to quit early.  Some workshop participants had already left for home.  Not me!

I was only aware of the clear shadow patterns disappearing and the thunderous noise of bikers who zipped by.  When you are focused on painting, the world around you disappear.  Friendly neighbors stopped by and talked about the house owners.  A bicyclist pulled over to watch me paint.  None of these bothered me.

Bobbi stopped by twice to check upon me.  She had a note pad to draw the designs of students' paintings to discuss the main compositional problems.  I was impressed.  She said that the left side of the house (it was painted as in the shade at that time) needed more interest--too big a shape to just sit there doing nothing of interest.  Following her suggestions, I moved an azalea bush, replacing a much smaller hosta, and made it spread over the stoop.  Two links of fancy ironwork fence were introduced at the bottom left of the picture, so that it would have a definite foreground.

One idea of hers I decided not to follow is flipping the flag to face the other way.  When I came home and printed out the above photo, I noticed the interesting diagonal shadow patterns on the sidings.  They weren't there when I was painting because it had become overcast.  Much of the happy, sunny look, which was the subject in the first place, I was painting from the memory.  So I painted in those shadows and that seemed to suffice to make the troubled area interesting.