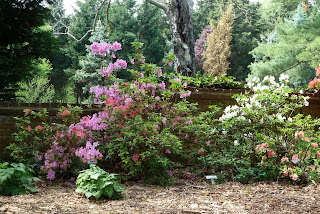 Back to River Farm in Alexandria, VA.  It was supposed to be in the 80's with scattered thunderstorms today.  As you can see above, it turned out to be a breezy, but gorgeous spring day.  I sat on the ground in the dappled shade and painted what I saw--lovely azaleas against a low red-brick wall.  A rather shallow space.  Hmmm.

Originally, I had painted in a fake blue sky behind the wall.  Sara Linda Poly, my plein-air painting teacher, suggested grayed woods instead.  During the lunch/critique, a friend of mine protested against the brick wall.  After a heated debate (I saying that the wall was there, he saying that it detracted from the beauty of azaleas), Sara mediated with the idea of introducing the blues and greens to the wall and adding a bit of sky to the background.  I went back to the azalea bed and modified the painting as suggested.

The moral of today's painting session, I think, is humility.  I was pleased with my painting and even thought about skipping the critique.  Although I was a bit annoyed at my friend's critique, I listened and tried to look at my work with an open mind.  He did have a point.  There was a lot of reflected light on the wall from the mulched bed and light greens of the plants.  It was practically glowing--something you cannot see in the photo.  The wall was not a red-brick color as I had painted.  Smug self-satisfaction is something we artists should watch out for.