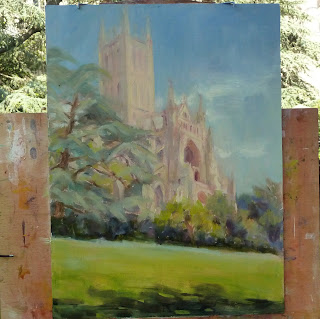 Yesterday, seven friends and I--the biggest group so far--went to the National Cathedral in Washington, DC.  We could not have chosen a better weather.  It was about 80 degrees, but with low humidity and nice breeze, it felt heavenly.  The place was not crowded at all; except occasional picnickers, we had the place pretty much to ourselves.  We felt truly blessed--well, until we started painting.

The National Cathedral is a 20th-century structure built in the Gothic style.  In spirit and manner of construction, you can say that it is medieval.  It's situated on a 50-acre ground, which also boasts a beautiful garden, called Bishop's Garden.  Last year when I painted there, I was absolutely overwhelmed by the sight of the cathedral.  So, instead, I painted a stone gazebo in the Bishop's Garden.

The gazebo with eight sides was hard enough to draw.  When I was finished, I was so pleased with the painting that I emailed it to my plein-air-painting teacher, Sara Poly, to show off.  Yesterday, I bravely tackled the cathedral itself.  Oh, my goodness.  I kept saying this to myself.  As it turned out, I had more trouble painting the magnificent cedar of Lebanon on the left.  I chose this view on purpose, calculating that with so much of the cathedral hidden behind the cedar, it shouldn't be too bad to paint the main subject itself.  I don't think I will be painting the cedar of Lebanon any time soon.

The cathedral was treated suggestively; otherwise, I would be still drawing it out there.  By the time, the bones of drawing and colors were put down (as you can see in the second picture from the top), I had to quit painting.  The sun had moved and there was no point in continuing.  I finished the painting in the studio today.

HAVE A GREAT INDEPENDENCE DAY WEEKEND!